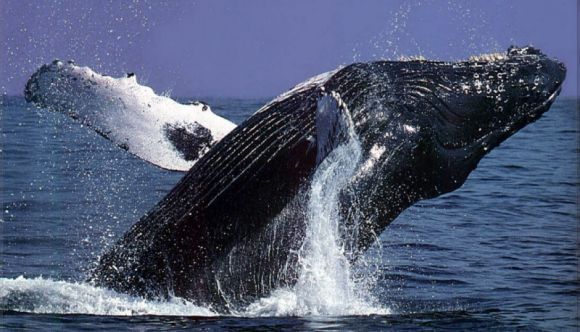 “Graceful and magnificent, humpback whales inspire awe in young and old alike. These marine mammals travel great distances to take advantage of the best breeding grounds and feeding spots. North Pacific humpbacks, for example, mate and give birth in Hawaii and then travel to Alaska each summer to feed.

These gentle giants are famous for their singing abilities – belting out seductive ballads to attract mates or to challenge other would-be suitors. But they also have other talents. Their unique hunting skill, called bubble-net feeding, involves a group of humpbacks working together to capture schools of herring. Each whale has a particular role in the process: One whale swims in a circle while blowing bubbles under a school of herring. When the bubbles rise, the school of herring can not escape and form into a tight ball in the center. Other whales vocalize – grunting or screaming – to scare the herring to the surface. The whales then rise with their mouths wide open to capture large amounts of fish.

The giants of the deep are slow swimmers, which made them easy targets for whalers, who almost wiped them out. About 2,000 live in the north Pacific and are slowly coming back to their traditional areas around Vancouver Island, but are still listed as threatened. Around northern Vancouver Island, whale watchers are hearing the complex and beautiful songs of the humpbacks for the first time in decades. Humpbacks, which grow to between 14 and 19 metres, with a huge fluke, travel in pods and migrate from feeding grounds in Alaska to their breeding grounds around Hawaii. Over harvesting of small fish, which form the major part of their diet, exposure to oil and entanglement in fishing nets are their main threats”.

“In mid-February, the Gray Whales begin their migration north to their summer feeding grounds in the Bering Sea and Arctic Ocean. Approximately 20,000 gray whales migrate along the west coast of Vancouver Island. They stop to rest and feed in the Island’s protected bays, ending a fast that began the previous fall. These whales, with the exception of 40 to 50 resident whales who spend the entire summer feeding off Vancouver Island, reach the Arctic by June”.

“Resident killer whales on the BC coast are divided into two groups: the NORTHERN community and the SOUTHERN community. The population of orca that resides in the waters surrounding southern Vancouver Island is made up of three pods: J, K and L pods, and is commonly referred to as the Southern Resident population. Orcas, or killer whales, are the largest of the dolphins and one of the world’s most powerful predators. They feast on marine mammals such as seals, sea lions, and even whales, employing teeth that can be four inches long. They are known to grab seals right off the ice”.